I am going to enter this card into the Craft A Scene challenge, which I stumbled across while visiting another blog just after they had launched in January. This months challenge is Moonlight and I must admit that I have cheated a little, as my moonlight background is from the new Flower Soft CD, Wishing On A Star. The stamps that I have used are Lavinia Stamps which I bought last Summer at a show. This is the first time that they have seen an ink pad, so will qualify for Judith's Forgotten Friday Challenge. First I printed the moonlight image onto glossy photo paper, and then added the stamps. As well as the fairies, I also used a stampscapes branch, and grasses. I had several attempts at this as I found that using the stazon on the glossy paper was taking the image off as I removed the stamps. Eventually I managed to get it stamped by placing the stamps down and quickly removing them. I added some glitter to the wings of the fairies and the moon. After mounting the topper onto some pearlised light blue card and some black card, I then decorated another light blue piece of card using the stamps that match the CD, stamping the ivy stamp around the edge. I darkened the edges of this using broken glass and faded jeans distress ink pads, this was all then placed onto a black A5 card blank. 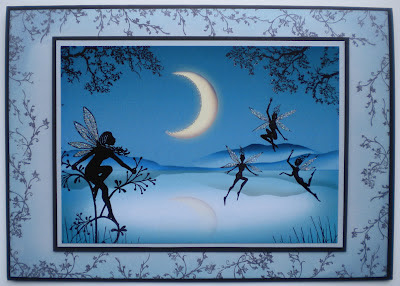 Thank you for taking the time to look.

Well, that Flower Soft background is impressive, but what you have done with it is even more. Lovely card with the little pixies. Thanks for joining us this month with Craft a Scene. NancyD

Gorgeous scene Sue, always love the fairies and you gave them a beautiful place to be! warm greetz Miranda

WOW! This is amazing!!! Thanks for joining us at Craft A Scene

This is such a great scene. love the pixies and reflection of the moon

I love this card,the flower soft background is perfect, and the Lavinia fairies stand out beautifully.I just may have to buy that CD, having seen this. I often get the same problem with Staz-on, I have to admit. Its as though it 'sticks' to the paper. I have switched mainly now to either Archival, Versafine or Memento. You can also get a really good black print with Adirondack Pitch Black I've found.

This is gorgeous, so soft and perfect for your little fairies! Good luck and thanks for joining in on the fun at Craft a Scene challenge blog.

Wow!! This is most beautiful Sue!! I LOVE Lavinia stamps and you've created a perfect scene for them!
Thanks for playing along with us at Craft A Scene!
Hugs,
Sheree

Hi Sue... what a gorgeous scene & card ! Love that background and the fairies are perfect with it. I'm just catching up with blog posts that I've missed over the past week. Take care, Shirley x

This is a beautiful card Sue, and I'm sorry that I didn't comment earlier. As you know, I've been missing in action a bit these past few weeks. I love the blue tones with black accents of your design, just gorgeous. Thanks for continuing with FF for me, hugs Judith xx

Amazing job, love the scene, thanks for joining us a Craft a Scene, hope you can join us again!!!

Love your background!! The soft look is beautiful, great card. Thanks for joining us at Craft a Scene, Anja

Beautiful card. I have just bought these backing papers and hoping the fairy stamps will arrive today :) x

Hi Sue ! I happened to land on the Create a Scene Blog for the first time and see that your card is in the TOP FIVE !!!!!!!! CONGRATULATIONS ! WELL DESERVED ! Your card is stunning ! Hope you had a great weekend, Shirley x