A Pad That Works At Long Last 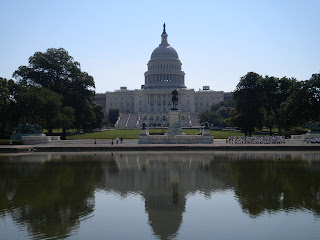 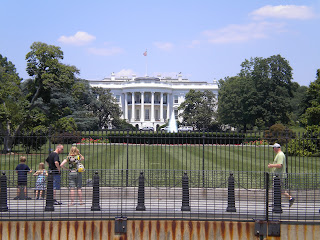 I won,t bore you with the details but I have power in the pad again. So I thought I would let you know how we,ve been getting up to.

Washington was wonderful, although my feet would disagree, we walked and walked all day, then went back a second day to see some of what we missed. I must admit so far it has been my favorite City. We left the car at the hotel and went in by Metro, the best way to travel into the Cities. All to soon our stay in Washington came to an end and we were on the move again, this time travelling south to New Orleans.

The rain returned for the start of the day as we set off to travel the Skyride which travels across the top of the Apelation Mountains. Had it not been raining the views would have been stunning, unfortunately we saw a lot of the inside od the clouds. We stopped for the night in a town called Rowenoak. It was going to take three days travelling to get to New Orleans so it was an early start the next morning heading for Chattanooga. We hoped to be there early enought to see one of the natural wonders of America, seen at Chattanooga  (no it wasen't the train). Chattanooga is home to the Ruby Falls, a beautiful underground waterfall. It was while here that I discovered that the sore throat I had been ignoring all day was a bit more that a sore throat. I was so cold when we got back to the hotel I fell into bed shivering (the temperature outside was in the mid nineties) where I stayed until the following morning. Again another very early start, and I felt ill, I slept all the way to New Orleans. Once there hubby checked into the hotel and asked for directions to the nerest Doctor. Two hours later and some antibiotics I was tucked up in bed again.

The following morning there wasen't anyway I was up to a trip to the French Quarter so Hubby and Dave took themselves off on the bus for the day. I'm glad to say that my day in bed done me the world of good, and while I've not been at full steam ahead, I am getting to see the sights again.

Next stop was Gracelands, Memphis. Elvis had a wonderful home and I enjoyed our visit there' but it was a lot of money to get in. We came away feeling ripped off.

From Memphis we headed North again, this time to St Louis. We stayed just outside on the other side of the Mississippi river, again taking the metro into the City. We had a wonderful ride on a riverboat before returning to shore for a trip to the top of the Gateway Arch. Well worth a trip to the top, you can see for thirty miles in each dirction from the top.

Today we've come even further north and are now just outside of Chicago. I'm sure that we are going to find plenty to do when we hit the town/city tomorrow.

It's Been A While

You know when you've done something really stupid.... well I forgot to pack the mains plug for hubbys pad, I packed the lead which is a USB connection, just not the plug. So now I have an uncharged pad that I cannot use. I am now relying on the hotel PC to post this.

Our second day at Cape Cod we had a great day exploring Martha's Vineyard, this was a short ferry ride from the mainland. Once there we hopped onto a bus, these went from town to town, you could get out and have a wander around the small towns and then hop onto the next one to the next town. Hubby says he would like to move there, it is so beautiful.

We moved on from Cape Cod and stopped overnight near Hartford. We were in plenty off time for a bit of a wander and ended up going to Mark Twain's house, most famous for Tom Brown's Schooldays. Apparently two reporters are reported to have said that it looked like a paddle steamer, hotly denied of course by Mark Twain. After our nights rest we moved on and are now just outside of Philidelphia. We arrived early yesterday afternoon and managed to get rid of our luggage by booking into out hotel early. So hopped back into the car and headed to one of the attractions in the city, The Eastern State Panitentiary.. This was built in 1829, a revelutionary way of reforming criminals by keeping them compleatly alone 24/7 they were allowed 2 half hours of exercise a day, in a yard outside their cells, they were not allowed to talk to or comunicate with any of the other prisoners. The punishment was very hash if they were caught doing so. In the early 1900's the prison changed and prisoners were then allowed to mix with each other. The prison's most famous resident was Al Capone, he was there for about eight months in total. His cell was furnished like a palace with oriental rugs an armchair and even a radio. We thought we would be there about an hour, we were kicked out 15 minute after it closed.


Friday and it has been mostly walking with another trip into the city, here we visited the Constitution Building (I have never seen so many school children in one place before). Also the Liberty Bell, Liberty Hall, Ben Franklin's House and Betty Ross's house. I don't think that I have walked so far in years, my feet are definatly letting me know. Next it was back to the hotel to pack ready for moving on to Washington, luckily it was not to far to drive (154 miles).

We arrived in Washington just after 2.00 pm, after a stop for lunch in Balltimore, in the oldest Saloon in the US. As we were too early to book into our hotel we got one visit in early, that was to Arlington Cemetary. We cheated a bit and did the tour bus that stopped at certain places, like the graave of  J F Kennedy and family , also the tomb of the unknown soilders where the tomb is guarded day and night. We were lucky to be there to see the changing of the guard. We are now at the hotel planning what to do tomorrow. Sorry there are no photos hopefully I will be able to add these later.

We seem to have been on the road all day today, maybe because of the weather. We left Boston at 9.00 am after another huge breakfast and headed towards Plymouth to see where the Pilgrim Fathers made their first homes all those years ago. There was a replica of the Mayflower, which I will admit we did not go on as it was raining and blowing quite hard. We did however sit in a cafe and look out over the harbour before moving on.

Next we headed to Cape Cod, and a wonderful drive along the coast road. Even with bad weather it was lovely looking at all the wonderful house's as we travelled. We stopped about 2.00pm for some lunch in a lovely cafe, from the outside it looked a bit like someones home. Next we pushed on and made our way to the tip of cape cod. It was still wet but we made it, at the very end there is a monument to the Pilgrim's Hubby and Dave were brave and walked to the top (about 250 feet) I'm afraid that I chickened out. We are now at our second hotel, in the dry at long last. Tomorrow we are hoping to go to Martha's Vineyard by boat, weather permitting of coarse, they wern't sailing today, guess why. 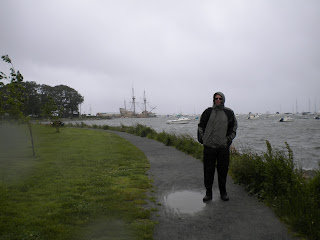 Boston And A Super Duck Tour

Well we're here, the weather is about the same here as it is in England at the moment, dull and overcast. But that hasen't stoped us getting out and about. We woke early this morning and had a cup of tea in bed before 7.00 am, then by 8.00 am we went to find somewhere to have breakfast, what a breakfast it was too. By 9.30 we were off into Boston (we're staying about 17 miles outside) and signed up for a Super Duck Tour. This was a bus/boat that took us on a tour of Boston, seeing all the major sights on land before heading onto the water for a ride around the harbour. The sights looking back towards land were great.

When we returned to dryland as we were right next to the Navel Dockyard. In Boston this is owned by the City, as President Nixon closed the Navel Dockyard when he took office in the seventies. There is still a Navel presence there though, as this is where the USS Constitution is docked. The USS Constitution is the oldest warship still afloat and does go out to sea several times a year. She is only beaten in size by HMS Victory in age, but The Victory is now in dry dock and doesn't go to sea. We were able to go on board and had a guided tour.

Tomorrow we are moving on to Cape Cod so we have the map out looking at routes and the laptop out looking for another hotel. 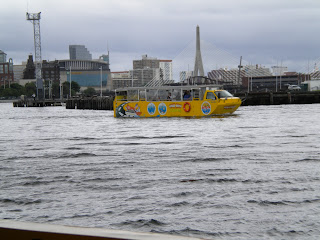 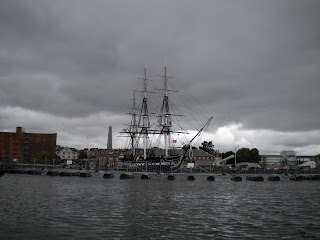 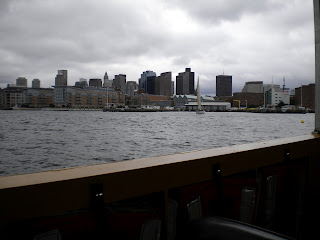 Posted by Sue's Crafty Corner at 23:24 No comments: