I made this card for my Great Nephews 18th Birthday which was a few days ago and I hadn't got around to showing it on here. Then just now I noticed that the challenge this time over a Cardz 4 Guyz was Music. So now would seem the right time to show you and also enter the challenge too. I used distress inks for the background and also a stencil from Sheena Douglas. The sentiment stamp was  a free one from the front of a magazine and the other two are from Visible image. The 18 Today was from All Occasions Dies and all was put together with a piece of Silver mirri card and an 8x8 black card base. 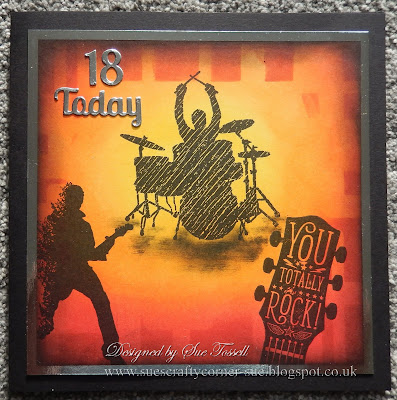 Regular followers of this blog will know that my Father-in-law has been in hospital recently, the good news is that he's been home now for five days. We've had a few mishaps along the way but fingers crossed he's on the mend. This means that I've had more me time to play, although I've spent the best part of the last week clearing my Craft room of the bit's and pieces I'd left out after the Christmas rush it did mean that I could pop some card and stamps into my bag and take to the Craft and Chat group that my Crafty Buddy has set up locally every other Thursday evening. I had great fun playing with the new Lavinia stamps that came out a few months ago. When I was mounting this onto the card base I realised that it fitted in with this months challenge over at Stamping Sensations which this month is Cold Frosty Colours. So I'm off now to join in. 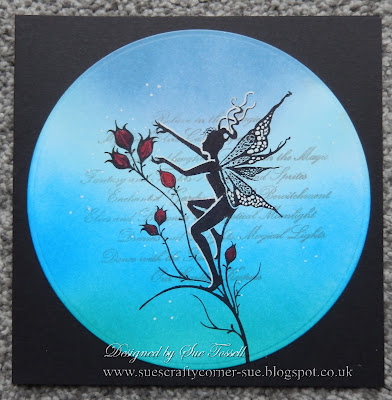 A Rudolph For Rudolph Days

I've never been able to resist a bargain, so when Debbie Moore had 70% off of CD's over Christmas I just had to buy a couple that I did not have in my huge collection. One of them being Rudolph and Friends, so I could not think of anything more appropriate to start off this years Rudolph Days Challenge than Rudolph. I made my card base from some left over card from an A3 piece that I used on another project making a slightly odd sized card at 5 1/2 x 6 1/2, then I printed off a backing sheet and a decoupage topper. Once all of the pieces where cut out I used an off cut of gold mirri for matting  and then stuck the base of the decoupage to the card with some foam tape. Next I built up the layers with Glue Gel and lastly added a Merry Christmas cut out of the left over piece of gold using an All Occasions die. 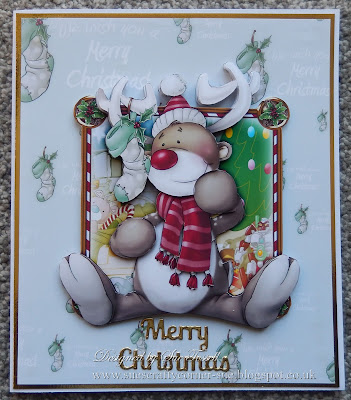 Before Christmas you may remember that I had to make five cards for a 75th Birthday all for the same family, well they now have a 21st Birthday coming up and yes I've been asked to make five 21st cards now. This one fits in with a few of the challenges and I'm safe to post this now as I know that the person receiving this card does not visit my blog. First I sprayed a piece if linen card stock with Dylusion Sprays and put to one side to dry while I got on with the rest of the card. I took an 8x8 white card blank and then folded the front of the card back on itself. I then cut out some flowers from some scraps of card from my box and also stamped the butterfly onto another piece. I used Stampin Up Bermuda Bay to stamp the butterfly which was from Impression Obsession and then with a water brush pulled out the colour. I then used the same ink around the edges of the flowers, before putting them together and adding some gems to the middles. Then with more scraps I cut out the Celebrate and u r 21, the leaf spray's were from some that I had already cut out.  I then cut up the background and popped onto the card using a silver linen effect card for the matting and also some silver ribbon too, then finally adding the flowers and butterfly. 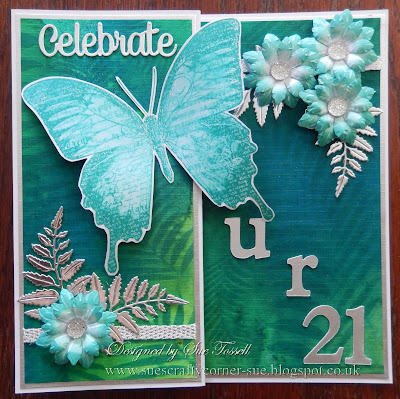 Below is a photo showing the fold in the card front. 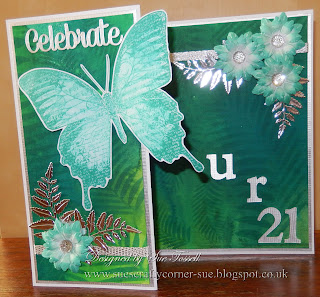 I am going to take part in the following challenges with this card.
Butterfly Challenge - X is for extra fold and/or the colour peacock blue/green
Allsorts - Butterflies
A Bit More Time To Craft - Anything Goes
Pixies Snippets Playground - Must Use Scraps

There's a new challenge blog just gone live called Twofer, the aim is to make two cards using the same stamps, dies etc to make two cards for different occasions. The first is Feathers, these can be attached to a bird on their own or incorporated in something. The cards below are what I came up with for the challenge. I used a stamp from a set of stamps called Peacock Glory from Chocolate Baroque and the sentiments are from a set called Mackintosh Sentiments again from Chocolate Baroque. The backgrounds were created using distress inks and a couple of texture stamps from Visible Image. 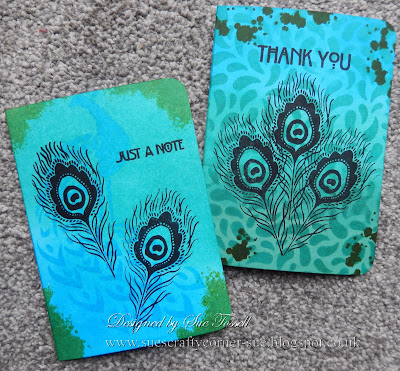 On the card below I used a stencil  on the background but can't remember who it was by as it's been in my stash so long. 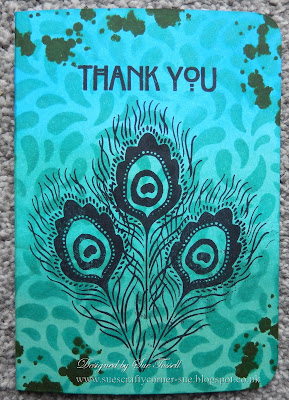 The stencil used on the card below is from Imagination crafts. 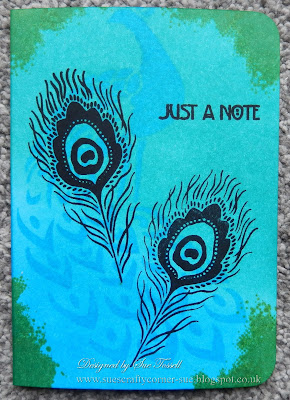 It was quite a busy time last week, with hospital visits everyday, thank you all for your good wishes. Father-in-law is still in hospital with a chest infection we're hoping he comes home later this week and Sister-in-law is now at home with no diagnosis as to what is wrong. She has to return for more tests though and has been given six weeks off work. Right now onto my card today, this has been made for the current Butterfly Challenge, which is only for a few more hours so I'm getting in by the skin of my teeth. On the 6th January I went with my friend down to Eileen Godwin's and took one of her wonderful workshops, we made one layer cards just like this one. So when I got home I knew that this was what I would do for the challenge, it was just a case of finding the time to tidy a little so I had room to craft. Well I managed it this morning and this was the result. An A6 one layer card using Picked Raspberry and Spun Sugar distress inks and then Picked Raspberry through a butterfly stencil. I then used the edge of a Visible Image stamp around the edges using Real Red from Stampin Up and then finally I used the Butterfly stamp from Visible Image and sentiment stamp from Crafters Companion. 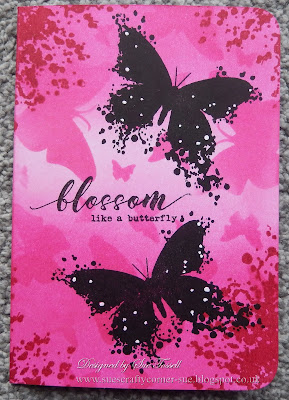 I'm going to enter this into the following challenges:
Butterfly Challenge - O is for one layer and or the colour Ultra Pink
Allsorts Challenge - No patterned papers
A Bit More Time To Craft - Anything Goes

Well I'm a bit late with the New Year Greetings with this blog post, but the New Year wasn't quite so good for us. New Year's eve my Father-in-law took a tumble at my Sister-in-law's (he was staying there for the New Year) this resulted in him breaking his hip and having to have a hip replacement done on New Year's Day. Everything went well with the op but as FIL is 90 in May it taken it's toll on him a bit. Two days later and now my Sister-In-law is in Hospital too with Kidney Stones. Hubby doesn't know which way is up at the moment.  Anyway onto my post today, after going to a workshop back in September when we cover a note book, I decided at the time that if I bought some inexpensive A5 diary's and covered them, that they would make good gifts for Christmas. I ended up covering 16 Diary's, 5 notebooks and 3 little journals (the journals were for 3 super little ladies). All were a big hit and I've had nothing but great feedback from all who received them. This is something I think I'll be doing again. 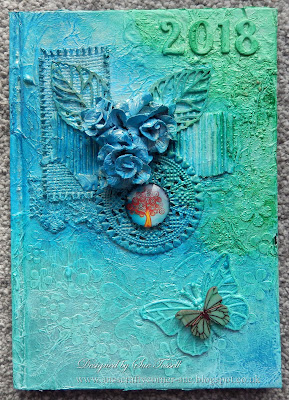 I'm entering this into the More Mixed Media challenge, which at the moment is anything goes and the option of blue. Think this covers everything.
I'm also going to pop over to Pixies Snippets Playground as I used some left over cardboard scraps on the front as well as making the 2018 out of scraps too. There's also a scrap of lace in there somewhere.

Thanks for taking the time to stop by today and your kind comments which are always appreciated.