The current Challenge over on the My Time To Craft blog is Wedding, Anniversary or Engagement. I always have room in my ready box for a wedding card so with this in mind I made this card for the challenge. I used an 8x8 card base and silver card for the matting and some of the die cuts. The backing paper is from a Joanna Sheen CD, Holly Pond Hill and the stamp is an old one from Lily Of The Valley. I coloured the image using colour pencils and then cut and mounted onto a Spellbinders die cut. I've used a Marianne die for the corners and some flowers that I won sometime ago from another challenge. The sentiment was made on the PC. 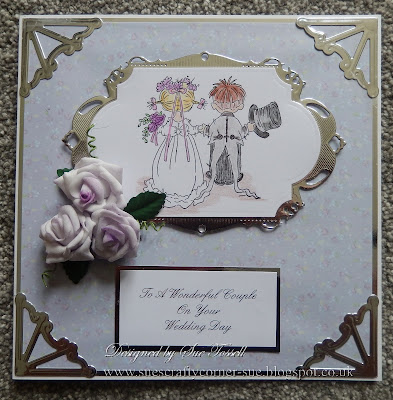 Labels: Lily of the Valley, Marianne, My Time To Craft, Spellbinders

I'm sure that I'm one of many woman who when they were younger imagined that there were Fairy's living at the bottom of the garden. In my garden they lived in the rockery behind the fish pond. The pond is no longer there but I'm sure that the Fairy's are there somewhere. I was asked to make this card by a friend and having just finished it found that it would fit with both the Allsorts Challenge this week, which is In My Garden and also the Lavinia challenge this month which is Childhood Dreams. I've used and 8x8 card blank for this card, I then cut out one of the cutting files from Lavina and made a scene to go behind the cut out and also a scene to go around the cut out, using Lavinia Stamps, distress ink pads and pro markers. I finished by adding glitter to the wings, sparkle pen to some of the flowers then adding a little white to the bottom flowers and the background. 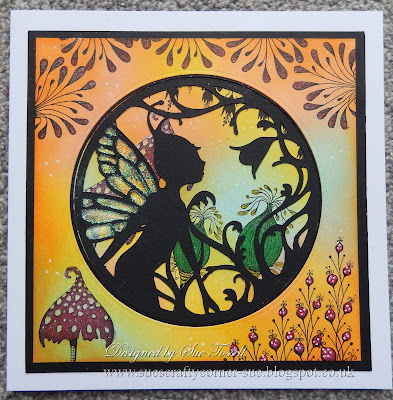 I not done much crafting the last couple of weeks as I have been organising  Carer's and meals on wheels for my mother who very suddenly was finding it hard to cope. Hopefully now that things are set up and in motion I can get back to normal.

I've just remembered that the Challenge over at Stamping Sensations this month is also In My Garden so I'll pop along there and enter this card there too.