The challenge over on the Allsorts blog this week is Insects, Bugs, Bees and Butterflies and as I had this wonderful bee stamp from Indigo Blu sitting on my work space waiting to be used it would have been rude not to join in. I started with an A 5 card black which I rounded the corners off. Next I blended a background using distress inks and a stencil that looked like honeycomb (I think this came from Bee Crafty but there are so many similar ones out there it's hard to remember) . I then stamped the bee and added the flowers, which came from Inkylicious at the bottom and a sentiment , that came from Chocolate Baroque at the top. I stamped the bee out again on a piece of scrap and coloured it with sparkle pens after fussy cutting it out. I then used a little glue gel just to lift it slightly off of the card. I also added a little highlighting with a white gel pen. 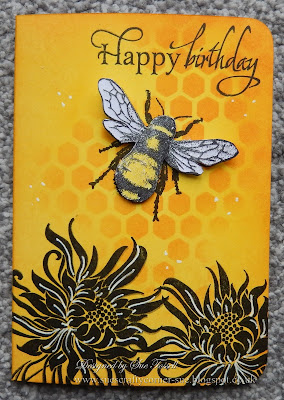 I can't believe that it's the 25th of the month already so it's time to head over to the Rudolph Days Challenge. I did manage to be a bit more organised this time and have a card ready to post. This time last year I had quite a big collection of cards ready for the big day in December, this year I am way behind. This prompted me to make 8 all of the same of this card. I bought the stamp that I've used about two years ago in a sale over on Imagination Crafts, along with a lot more (the price was really good) and have to admit that this is the first time that the stamp has been inked. I stamped with Memento Tuxedo Black and coloured with Pro-markers. I then fussy cut around the outside of the image. With a 5 1/2 x 5 1/2 card base and one of the smaller stamps in the set I randomly stamped over the card before sticking the topper onto the base. 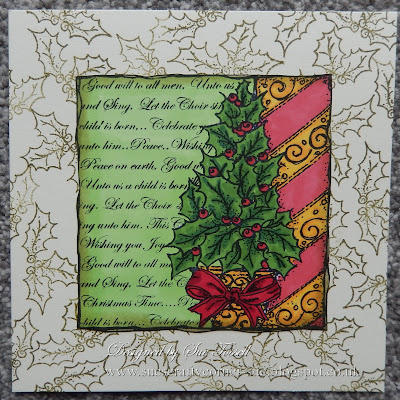 My card today has been made for the Butterfly Challenge, but after I made it I realised that it also fitted the Pixies Snippets Playground challenge too as all of the card stock except for the base came from the snippets/scraps box. I started with the Hunters Green card and then the Hot Pink, deciding that this was a bit plain on it's own I had another delve into the box. I found a piece of patterned card that went perfectly and after cutting everything to size I cut out a butterfly with the waste Hot Pink. I stamped and embossed Happy Birthday onto a piece of the Hunters Green waste. Next I stuck the patterned paper to the plain card and cut out another butterfly through both layers. I then stuck the Hot Pink and patterned piece onto the Hunters Green card this left a lovely green silhouette butterfly. I stuck the greeting to the bottom of the card and took the pink butterfly I cut earlier and placed this into the silhouette but only stuck the body down so that I could lift the wings. Then finally I added some antenna to the butterfly with a black liner pen. The butterfly die that I used was from Stampin Up

I used Hot Pink, Hunters Green and Heat Embossing from the Butterfly wheel. 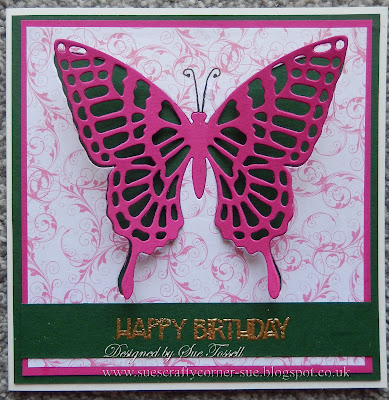 I'm back again with another card for Father-in-law's 90th Birthday. This time with a card that I made for my son to give to him. He grew up in the countryside of Cornwall, so I thought this card might bring back memories of his youth. I used Creative Crafting World's CD - Pollyanna Pickering's Sketchbook Collection - Chapter 5. I also used an 8x8 craft card as my base. 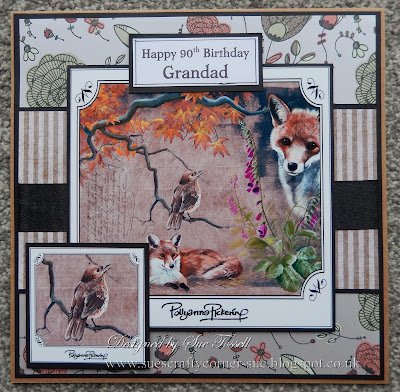 I'm going to enter this card into the current challenge over on the Allsorts Challenge blog which this week is Happy Birthday.

This week sees the Allsorts Challenge blog's 9th Birthday, so their challenge is Birthday Cards. Now this card has a 9 in it but not on it's own, however I'm sure that it will be perfect for the challenge. This has been made for my Father-in-laws birthday in a few days time, over the last year or so he has become more unable to get around under his own steam. When out he uses a wheelchair but around the home uses a walker. So when I saw this image I knew that this was what I would use to make his card. I'm glad to say he has a great sense of humour. The image comes from a La Pashe CD that has images from the former website Just Inklined. 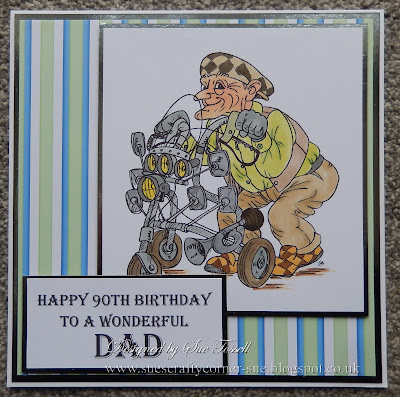 Happy Birthday Allsorts and may you have many more.

Last weekend saw Hubby loading the car and going off for a golfing weekend with his pals. So with this in mind I had a friend around and we had a crafty play. We had both wanted to try Acrylic Pouring and some time ago bought kits from Indigo Blu to try. We had also been watching You Tube video's and found lots of different ways of doing the Acrylic Pouring. So with lots of ideas running through our heads we retired to my Craft Shed (for all things messy) and had a play. By late afternoon and trying the technique we had seen at Ally Pally by B J Crafty we were sat watching paint dry, at that point it was pouring with rain outside and we had run out of room inside. We left the canvases to dry over night and started again on the Sunday this time trying the technique by Indigo Blu and also one we had found on You Tube. Below are some of the many canvases that I did using all of these techniques, they all dried slightly different but I love the results. Drying on Sunday was far easier too as it was sunny outside so we just covered the patio table with the canvases. 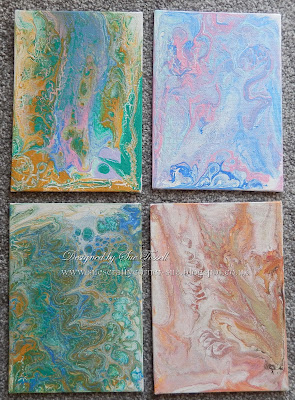 Some of my canvases were quite pale in colour and as soon as I saw them dry I thought of adding fairy scenes to them. This one below I made using the stamps only, the trouble with this was that it was a little patchy in the middle and I had to go over with a black marker. I also added some stickles. 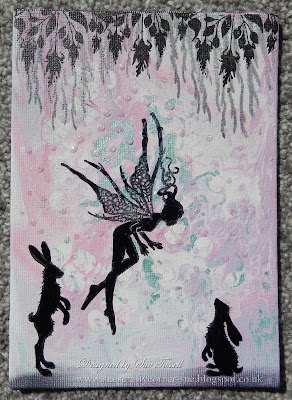 This bottom canvas was made using stamps around the outside and using a stencil in the middle and Archival ink. I added clear sparkle pen to the wings and some stickles around the fairy. Now all I need to do is find something to seal the canvases with. 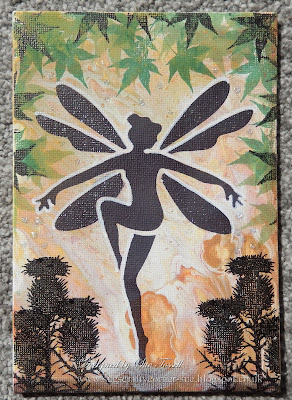 We had a wonderful time and the only problem we found was the space to leave the canvases to dry while searching for the next thing to pour onto. If you are thinking of trying this please bear that in mind because it is addictive.

Well I've managed to get back in less that a week this time. My card today is for my Grandson's God Mother, who loves fairy's. What a good excuse for me to make this card using one of the cutting files from Lavinia. I blended distress ink onto the card base in the centre using a mask and then adding some foliage using the stamps. Next I popped the cut out over the inked area and flooded the wings with glue and added some glitter. 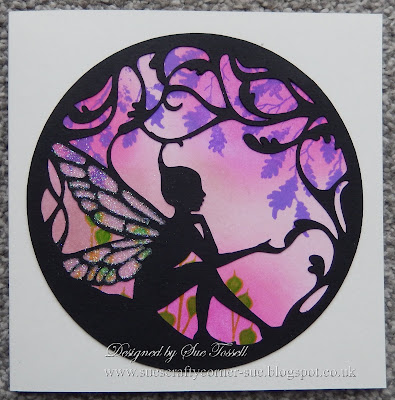 I'm going to enter this card into the following challenges:

Allsorts .. In The Pink
A Bit More Time To Craft .. Anything Goes

I don't know what's wrong with me at the moment, I just can't seem to get my act into gear. I've gone another week without posting anything on here, so today I'm going to post two cards. The first is for the Stamping Sensations challenge this month which is Close To Nature. This was a perfect excuse for me to get the Stampscape stamps out and inked up. Below is the result, I coloured the scene with pencils and added a little clear sparkle over the water (it doesn't show in the photo I'm afraid). I've not added a sentiment yet as I'm not sure who is going to receive it. 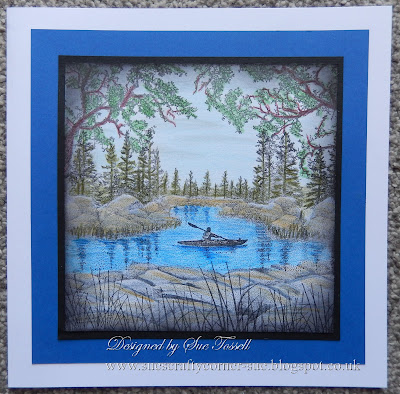 Next up is my card for the Allsorts challenge which is Fancy Folds this week. It's not a very fancy fold as I just folded back the front of the card. I had a lot of off cuts left over from a Graphic 45 project I made earlier this year which were calling out to be used. So after rummaging through the off cuts this is what I came up with. As it was using off cuts it also qualifies for Pixies Snippets Playground challenge, which is to use snippets/off cuts somewhere on your card. I added some clear sparkle pen to the fairy wings, a little glitter on the borders and a few gems on the front as well. 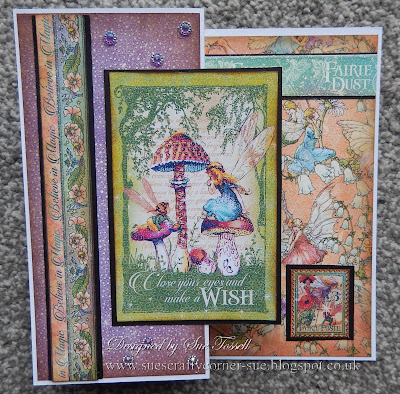 Thanks for taking the time to look and your kind comments which are always appreciated.
I promise to try harder and blog more often too.

Where Did That Week Go

I can't believe that a week has passed since I last posted on here. I've no excuse this time either. I did have a busy weekend starting on Friday evening where I attended a Powertex workshop at the local Hobbycraft store, where I made the canvas below. This was my first play with Powertex and it will make a great addition to my Mixed Media stash. 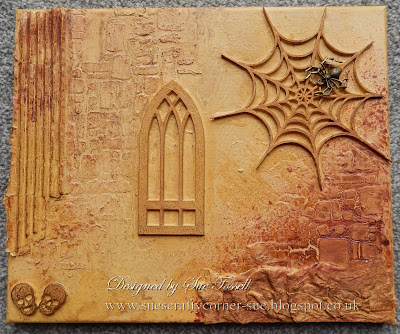 Then on Saturday myself and 2 other friends headed up the M3 to Feltham and spent the day crafting with Powertex at another friends house. This is where I covered the Hobbycraft Scrapbook, I really enjoyed making the canvas and decorating the front of the Album, now all I need to do is buy some Powertex of my own. 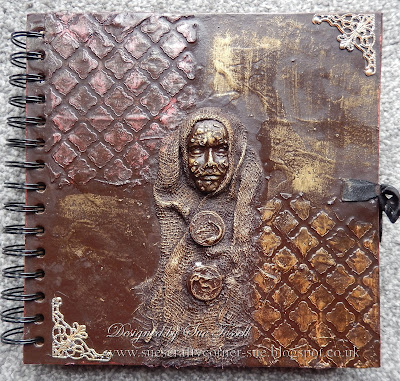