I can't believe how quickly the last month has flown by and it's the 25th of the month again. Time to play along over on Scrappymo's Rudolph Days challenge again. I was lucky enough to win the die from last month's challenge, a lovely holly die which I shall look forward to using in the future. This month I have used this gorgeous snowman from Stampendous. I stamped in versamark onto watercolour card stock and then embossed with Wow black sparkle embossing powder. Next I coloured using Aqua pro markers and a water brush. Finally I went around the edges with stormy sky distress ink before mounting onto a 6x6 card base. 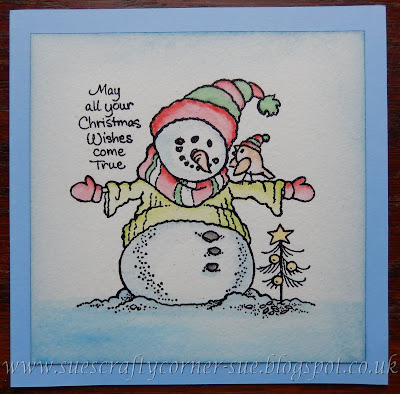 Another four cards to add to my growing collection for Christmas 2016. 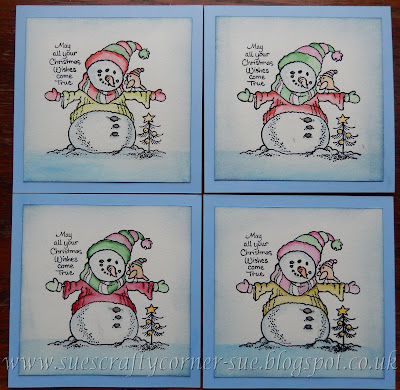 Happy Easter to everyone.
Thanks for taking the time to look and your kind comments which are always appreciated.

A Great Weekend Away

Well the retreat last weekend went really well, despite the fact that there was a terrible accident on the M42. Which held up traffic all day, Hubby and I took a detour and missed the last part of the motorway and arrived early afternoon. However a couple of the other ladies who left later sent me a text a 8.00pm on the Friday evening to say they were 27 miles away from the hotel. But they were sitting in a traffic jam, they finally made it to the hotel at 1.30 in the morning. Despite this we were ready to Craft at 9.30 on Saturday morning (all 8 of us). Our first day was spent discovering the delights of The Art Journal (ran by Mickey) and various ways to decorate the page (I'll show you some of what we did at a later date). The following day was a workshop that I ran and another (ran by Elaine) where we decorated a box frame (again I'll show you later, when I get it finished). The workshop that I ran was to decorate a canvas, and the idea behind this is that you decorate several canvases with photos and then join them together, sort of like a family tree. 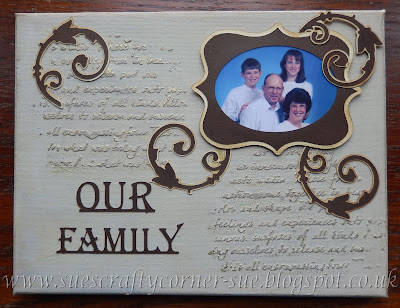 My first canvas was my sample and used a photo of the family when they were much younger. First I added paste through a stencil and then when dry painted with a mixture of gesso and a few drops of vintage photo distress ink mixed in. When all of this was dried I gently rubbed a little gold gilding wax over the paste areas. The photo was placed in a frame made from a cricut cartridge, along with some swirl and the wording also cut on the cricut ( this could be done with other cutting machines or suitable dies). After distressing with vintage photo they were glued into place. 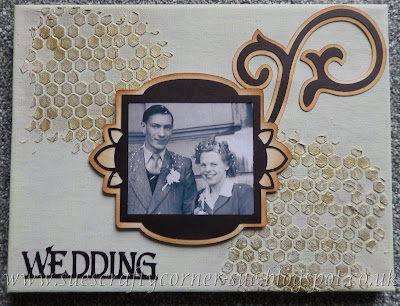 This second canvas was started at the retreat and finished at home, and shows my in-laws on their wedding day back in 1949. My next job is another canvas only this time with my parents on their wedding day. Glad to say there were no hold ups on the way home Sunday evening.

Just a quick post from me today as I'm off to Droitwich shortly, where the UK Stampers Network are having  their 2nd Annual Residential  Retreat. Should be a fun packed weekend and a chance to catch up with some fellow members. In the mean time I thought I would show you the card that I made for my Daughters 2nd wedding anniversary a few days ago. I used this image from the Twiggy and Toots CD from Polkadoodles (I love the owls on here). It's and 8x8 card base with gold mirri matting. The flowers are from a Crealies die shaped with a large ball tool and some gems added to the centres. The fern is from a Tattered Lace die and the sentiment from All occasions Dies. 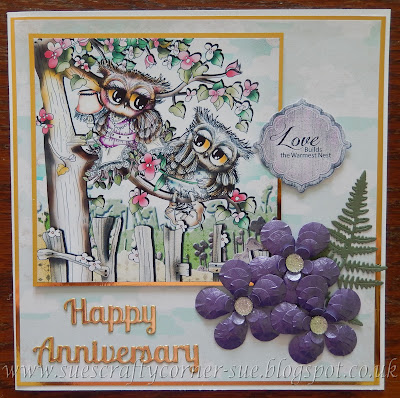 Happy Mothers Day to all you Mums out there. I've just returned from my Daughter's Mother-in-laws where both my daughter and her sister-in-law cooked a fantastic dinner for us, followed by delicious cake (won't do my diet and good). My mum was included in the dinner invite so it was a lovely get together. This is the card that I made for my Mum this year. I used a Tattered Lace die to cut the middle out and then decorated square. I blended Spun Sugar distress ink around the aperture, then the edges and also the centre piece that was cut out. I then glued this back onto the centre of the card and raised the rest up on foam tape. Then I printed out some of the roses from the Tattered Lace Charisma Rose CD and cut them using the matching dies, mounted onto two of the corners of the aperture with glue gel before adding some gems to finish. 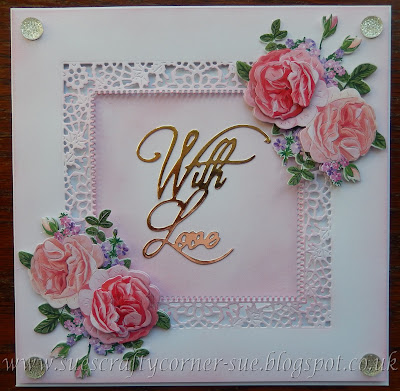 I love the warm colours on this months Chocolate Baroque Challenge and have had them sat on my desk for a few days now. When I saw Claire's inspiration card over on the blog this week it reminded me that I had these stamps in the back of the cupboard and it's been a long time since they came out to play. 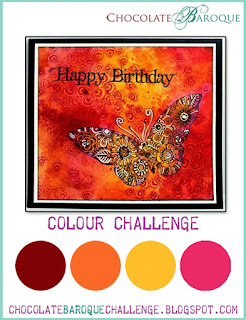 So after a bit of a rummage this is what I came up with. My card base is A5 with the topper made slightly smaller. With distress inks in Spiced Marmalade, Mustard Seed, Worn Lipstick and Barn Door, I used my brushes to achieve the background sky and hills. Next with black onyx and stamps from various sets I created my scene. The sentiment is from a set that I can't find on the website but included similar sayings to the one on the card. I added Wink Of Stella in clear to the wings and lifted the colour from the toadstools at the bottom and coloured with a white opaque pen. 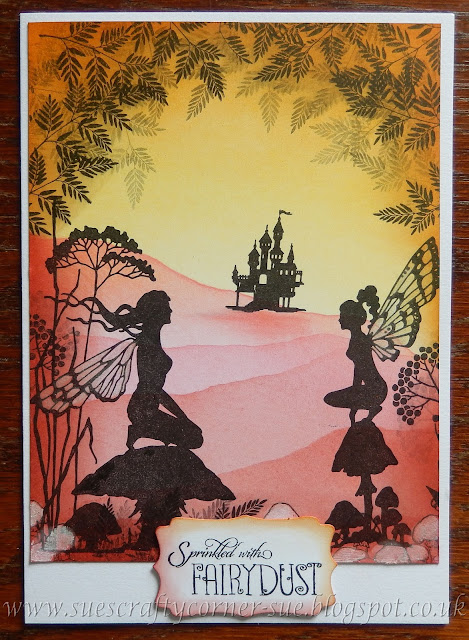