A Couple of Christmas Gifts

This week I've been busy making these memory boxes as Christmas gifts. I bought the boxes from the MDF man at a show earlier this year, and after making one a month or so ago for a great niece for Christmas (still have another to make for her older sister yet, but will be putting her name on it) I thought I would make a couple more. First the boxes were treated to a cover of gesso and while they were drying I sat down and had a look a what backing papers I had on CDs that I could use to cover them. I went for this lovely backing paper from Chocolate Baroque and the Decadent Brocade CD (on sale at the moment on the CB website) For the larger box I chose the peachy colour and the smaller box the blues. For the inside I used a backing paper from the same CD in matching colours but a different design. 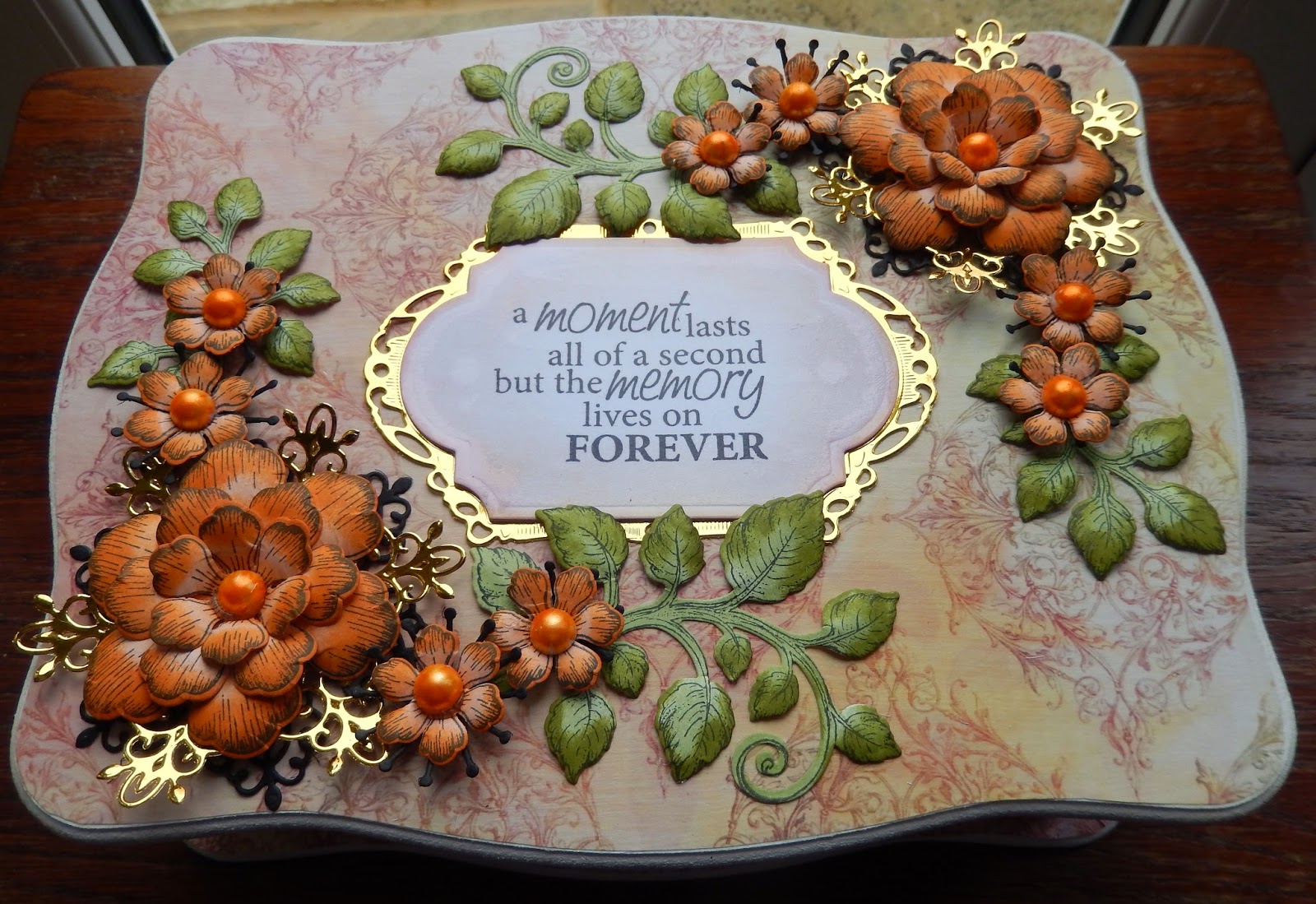 The backing papers where applied with Matt glue and seal, this could also be done with a gloss finish as well. The flowers and leaves are from Heartfelt Creations, the Arianna Collection, and the sentiment are from a Fiskers set based around Memories. The flowers were coloured with ink pads and a blending tool and then shaped with a ball tool, before being stuck onto the top. 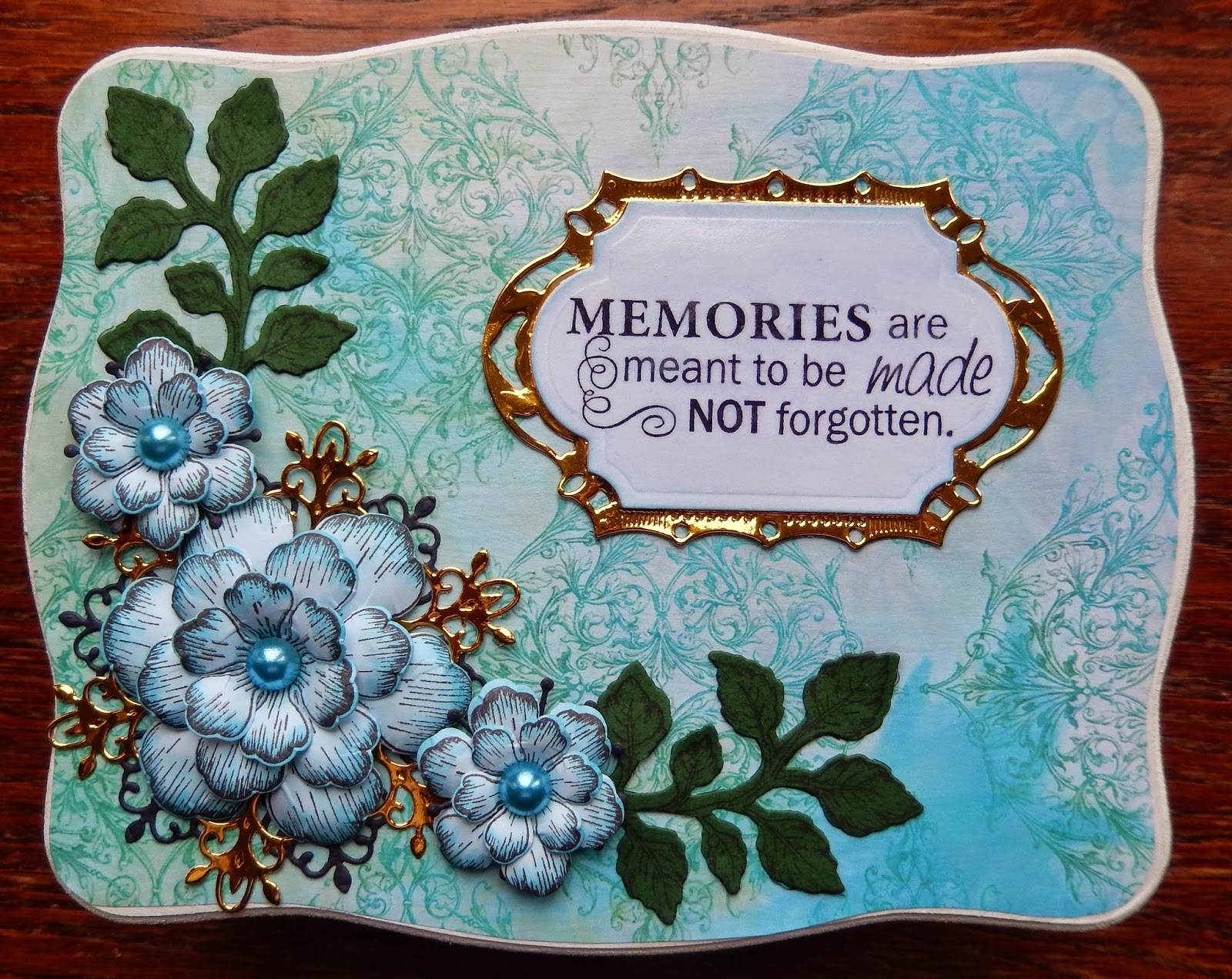 Thank you for taking the time time to look and your kind comments which are always appreciated.

This week has flown by, I can't believe that it's Friday already. I have a card to share today that I made earlier this week using this stamp from Chocolate Baroque off the Child is Born stamp sheet. On my PC I had this down loadable sheet music for While Shepherds Watched Their Flocks By Night, so I faded the image and then printed it off and stamped over the top. I coloured with  promarkers and then went over the background with distress inks. I then distressed the edges with a Tim Holtz distress tool before mounting onto some mid blue card. Finally I mounted onto an A5 pale blue card base. I felt that it didn't need any more embellishments or sentiments added, so for me this is a fairly CAS card. 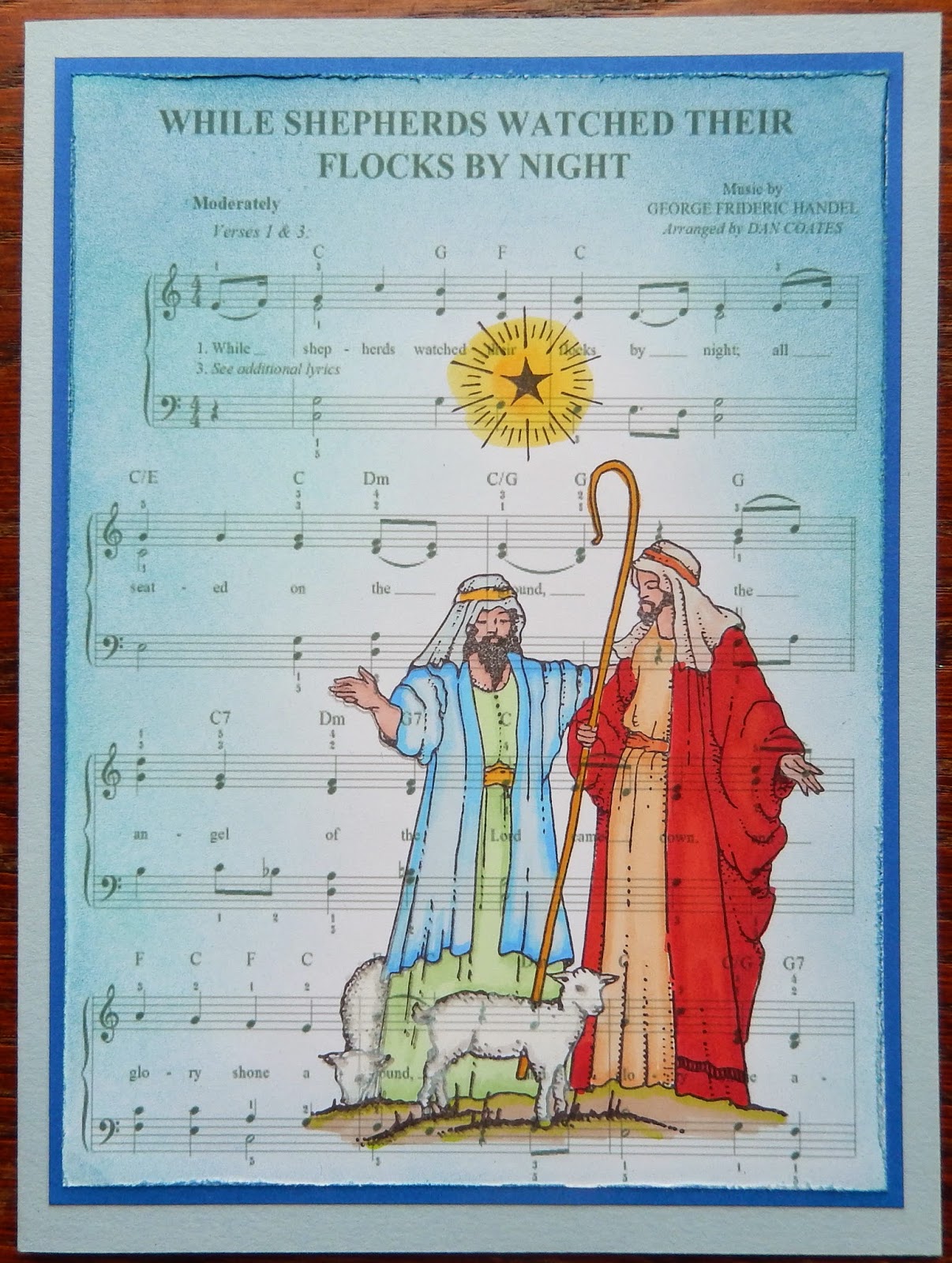 I'm going to enter this card into this months challenge over on the Stamping Sensations blog which
this month is Christmas.

It's week 3 over on the Craft A Scene blog and we're still asking to see you cards with trees on them. For my card this week I've used a set from Inkylicious call Old Beech Tree, the sentiment is from the same set. I started by stamping the tree, sentiment and the bird in black Archival ink and then using ink dusters and distress inks to colour the background. Once done I then mounted onto some silver card and a blue base card. I do hope you have time to pop over to the challenge blog and see what the DT have made for your inspiration this month. 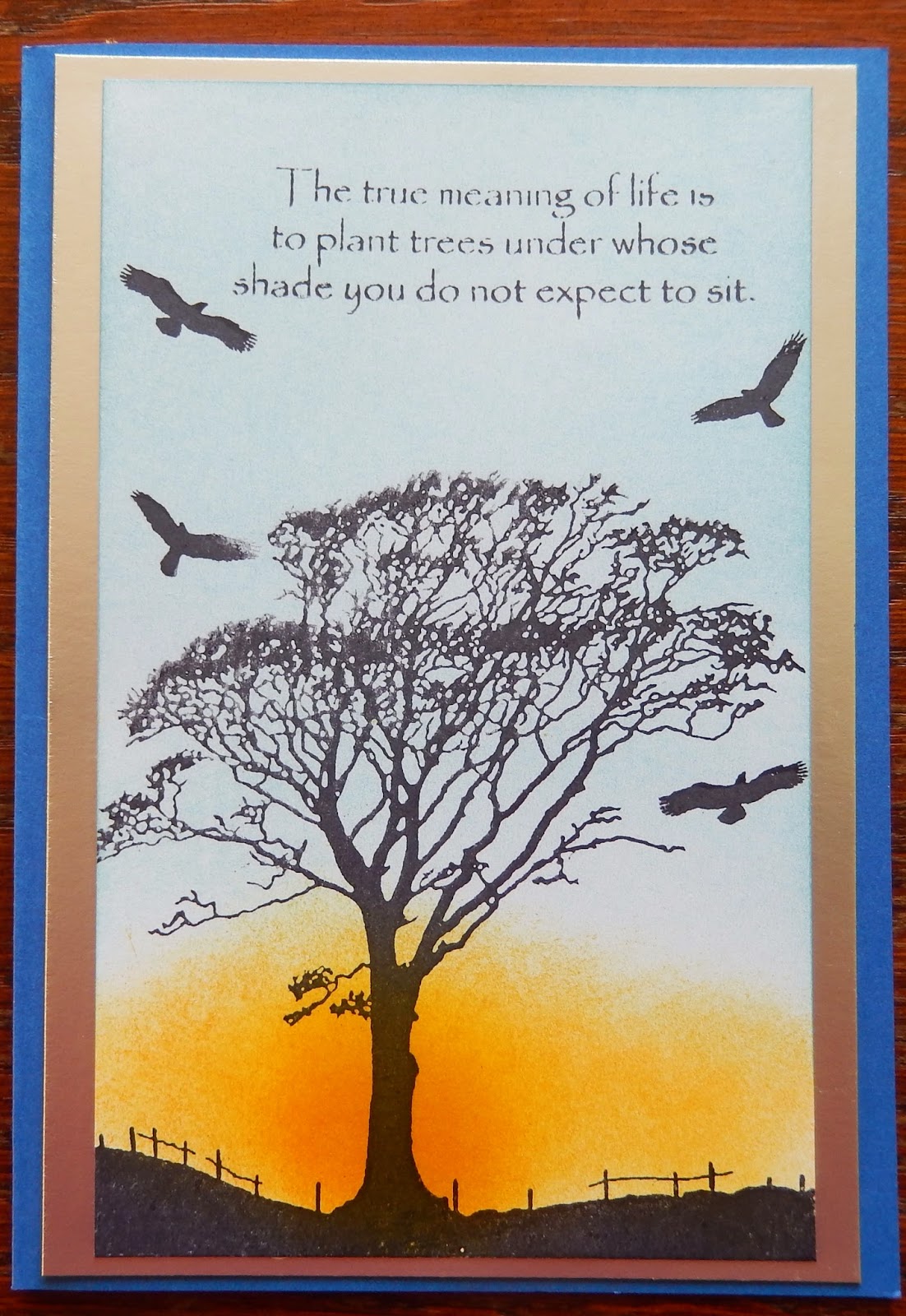 As I spent last Christmas and New Year in America I was there for the sales. I picked this stamp from Stampendous for the equivalent of £2.50 in Micheal's, wood mounted too, not that I normally go for wood mounted. I stamped onto some white card with Navy Stazon and the using Tumbled Glass distress ink I coloured the image, picking the holly out with some pro markers. I then mounted onto some silver mirri card. I picked a backing paper in a matching colour from a Crafters Companion CD, sorry I can't remember which one. I had the holly die cuts already cut out and added these, along with one of Sue Wilson's poinsettia Dies which I added glitter too. 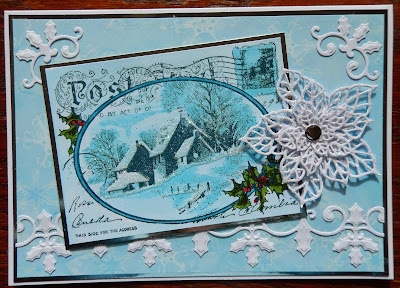 I can't believe how quickly this month is flying by, only a few more weeks and Christmas will be upon us once again. Last year I tried to make a couple of Christmas cards each week so I was at least a little bit prepared. I'm going to try and do that again next year so it doesn't sneak up like this year.

A Photo And A Request

The other day I had an email from my Daughter with a photo attached. Could I make a 50th Birthday card for later this week using the attached photo. So first I took the photo into Paintshop Pro and played around with the special effects. I created a seamless tile (so I could make a backing paper), made the topper using a weave effect and flowers using the kaleidoscope effect. 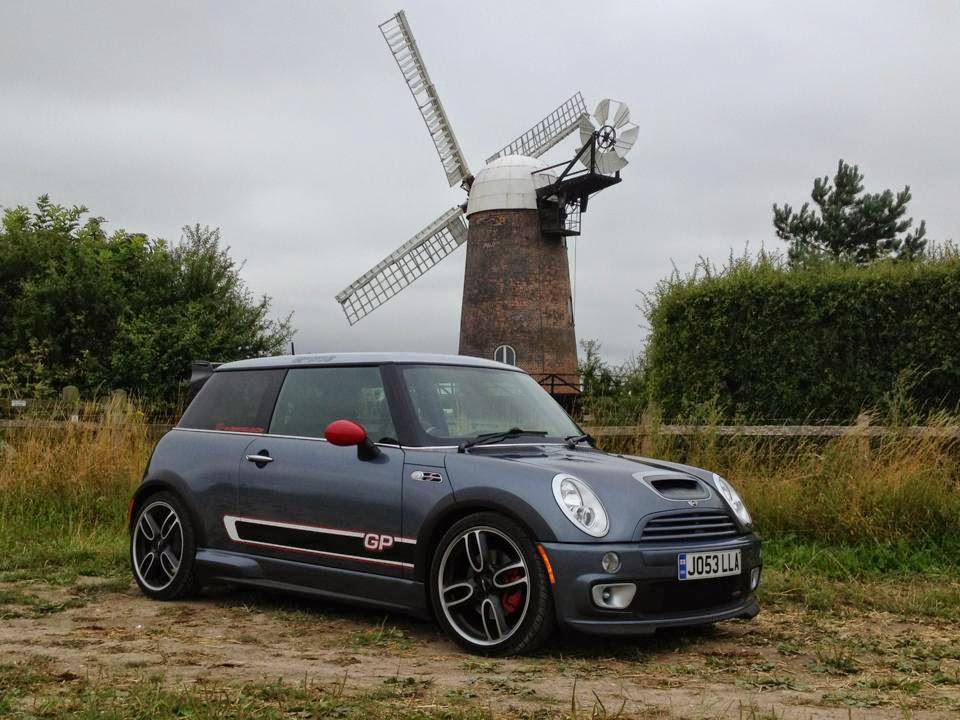 After saving them as jpg images I opened MCS and set about making a card with the different pictures. I tiled the seamless photo creating a backing paper, which I mounted onto silver mirri card. Next I mounted the picture with the weave effect on silver mirri card, and mounted using foam pads. 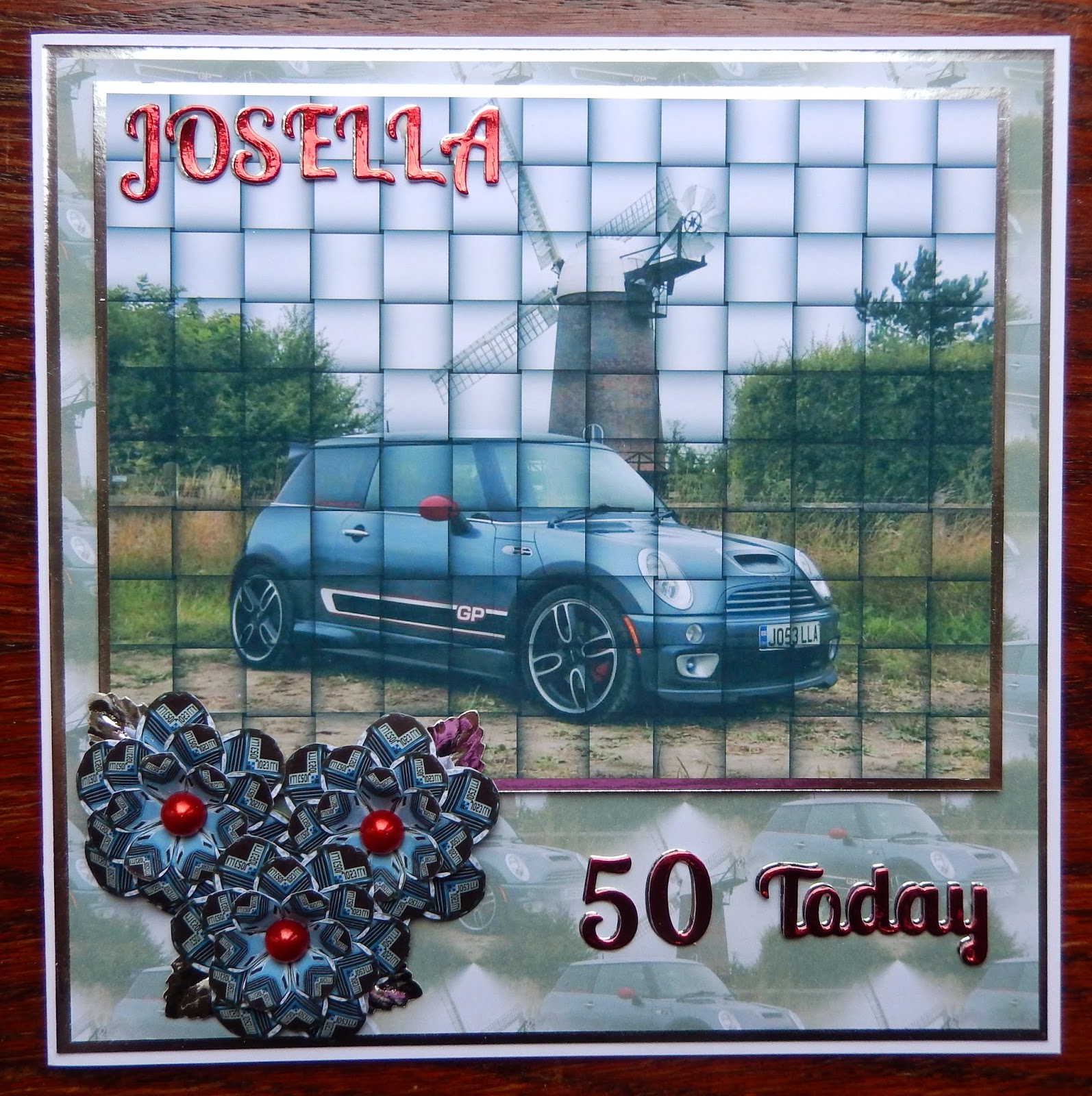 The flowers were copied and pasted and them re-sized so I ended up with 5, 4 and 3 cm flowers. These were then cut out, shaped and layered before adding some flat backed pearls into the centres. I tried to match the red to the red on the wing mirrors. I also added some silver leaves cut our using a Nelli Snellen punch. 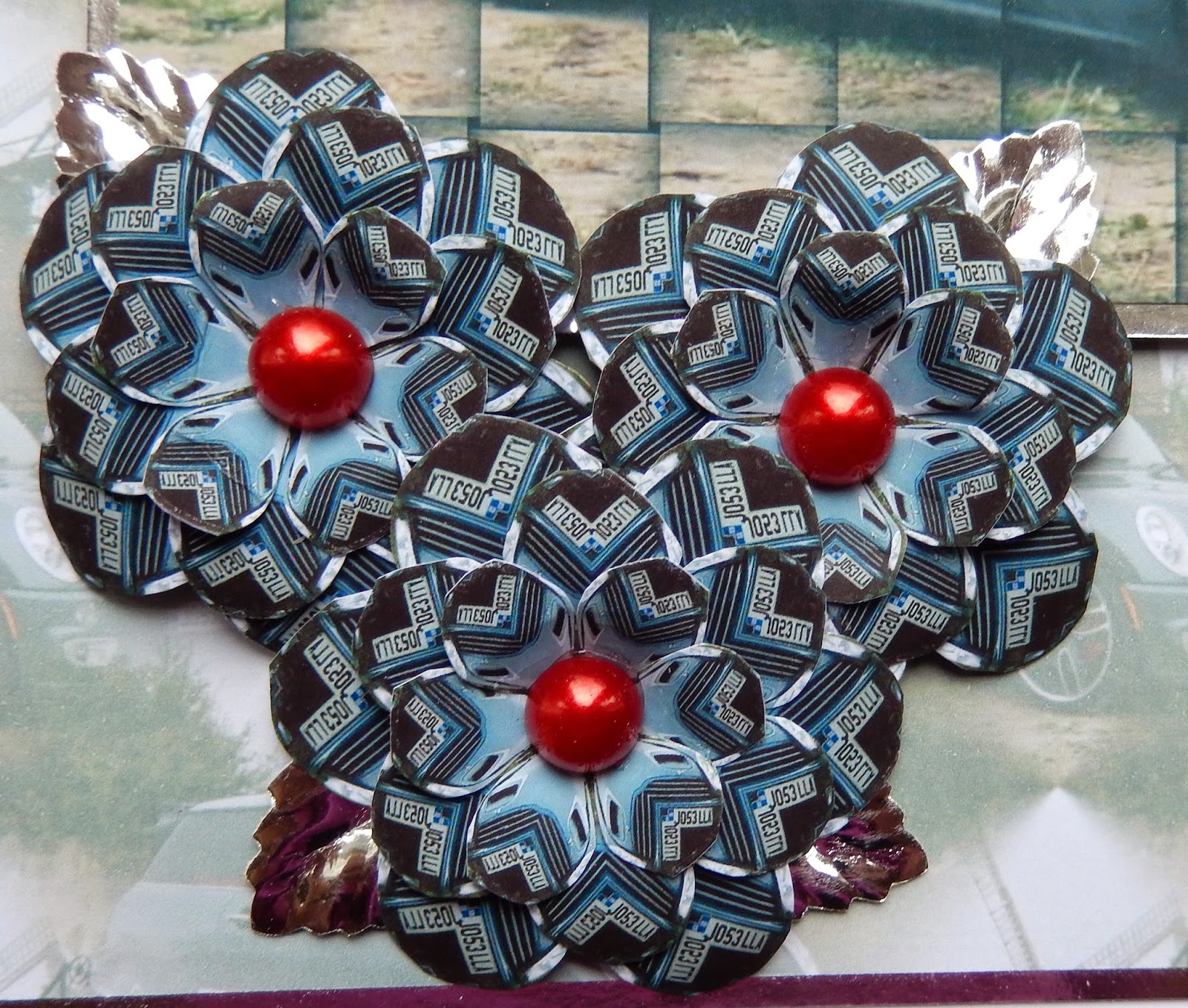 Finally I cut out the name, and 50 today using some Rob Addams dies. These were cut out in Silver and Red mirri and the red placed on top of the silver for effect. The photo that my Daughter sent was of the Birthday girls own car, and I've managed to get the name onto each of the petals on the flowers. You can just see it if you look closely. Just hope she likes it now.

A new month and a new challenge over on the Craft A Scene blog. This month we would like to see your scenes include trees. For my scene I've used mainly stamps from Stamp Addicts to create this scene of the English countryside, which shows how the land is broken up with hedgerows and trees. I decided to make it an Autumnal scene showing trees that have lost their leaves, evergreen trees, and hedgerows that have their leave turning. Very often in the Countryside around the area which I live you will often see deer grazing, so I've popped a couple into the fore ground of my scene. These stamps were from Hobby Art. I coloured the whole scene with pencils and finished by going around the edge of the card with a Gold pen, before popping onto a 6x6 green card base. I do hope you'll take the time to pop over to the challenge blog and take a look at the wonderful inspiration the DT has made for you this month. 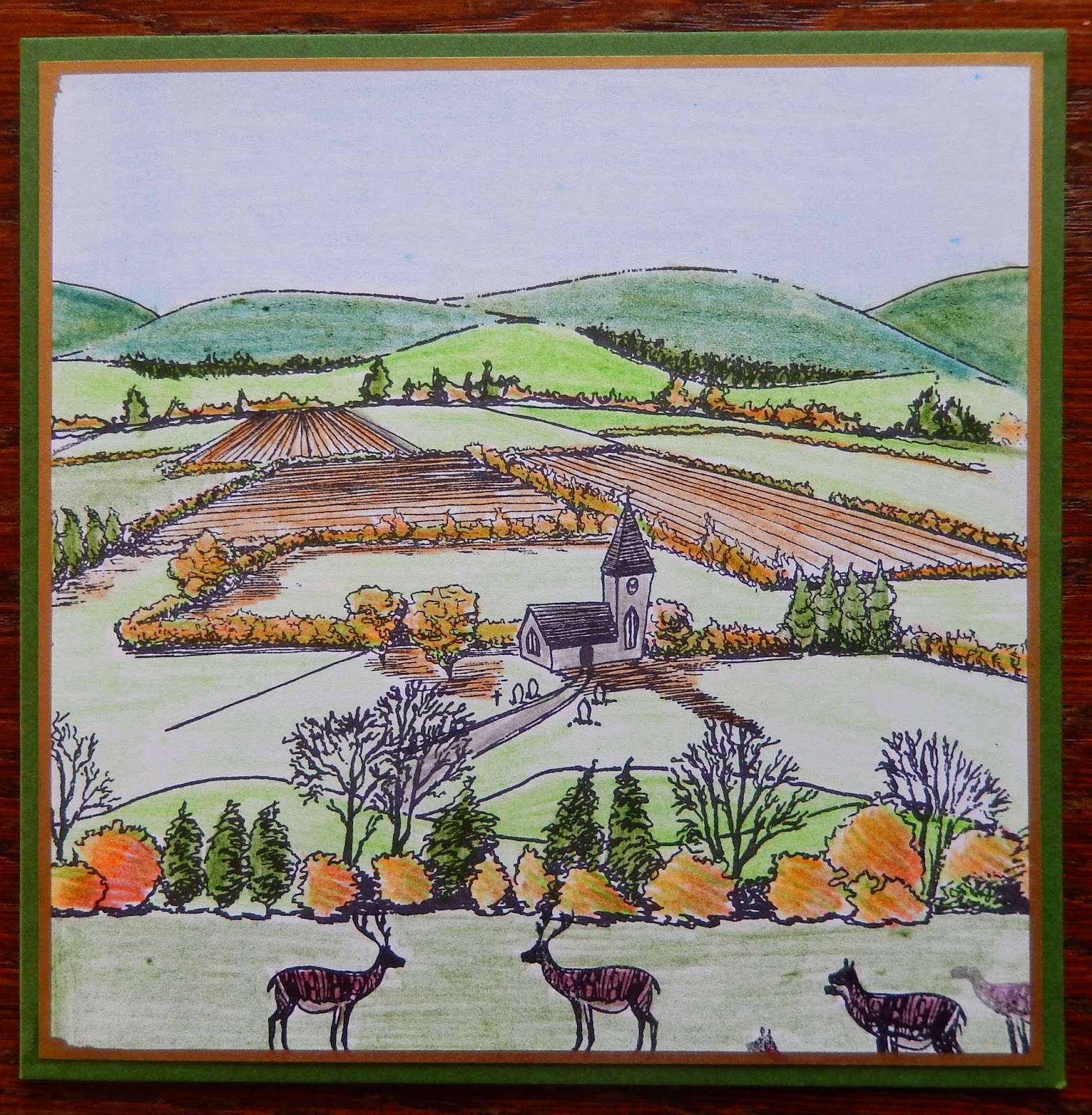 Thanks for taking the time to look and you kind comments which are always appreciated.