CD Sunday - Land Of The Pharaohs

This week's challenge on the CD Sunday blog is Land Of The Pharaohs, so after putting on my thinking cap and trying to remember which CD's I had that would fit this week, I came up with the card below. I used Debbi Moore's Eastern Promise for this I used an 8x8 white card base and gold mirri card for matting. After matting the backing paper, I chose one of the scenes from the CD and taking it into MCS, I resized it before printing it off. It's not very clear but between the two figures you can see a pyramid in the background. With another of the backing papers I again took it into MCS and resized and cropped the border of hieroglyphics. The figures where also cropped and resized before being printed off twice and then layered up on the card. I've not added a sentiment as yet, as this will go into my ready card box until I need to use it. Maybe as an Anniversary card for a younger couple. 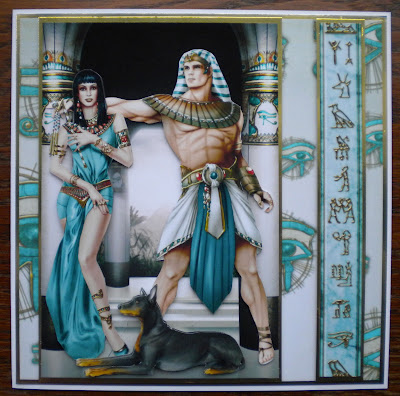 Thanks for taking the time to look, and you kind comments which are always appreciated.

Oh Sue - this is a great card. Love the colours and yes - I can see the pyramid. He cuts quite a dash doesn't he.
Thank you for your continued support.
Carol x
CD Sunday DT

this is a fabulous card Sue, looks great in 8x8 really shows it off, thanks for joining us at CD Sunday.
sue-b xx
CD Sunday DT

This is beautifully put together. I like the colours you've chosen. And what a hunk!
Marina

Wow Sue this is fantasic & such a unique card. Perfect for the challenge theme. The colours & design are beautiful. I hope you had a wonderful Mother's Day. Shirleyx

A super card Sue, so life like in 8x8, it really shows off the images. Fab images too. Thanks for your continued support of CD Sunday.
Christine xx
CD Sunday DT

I see we chose the same CD Sue. I love what you have done with it and I think your idea of making it an anniversary card for a young couple is such a good idea.
Jocelyn x
CD Sunday DT

what a great card Sue - the design is just right for the bigger card. x

Love the design of this card and the colours are stunning, he is a handsome chap isn't he?
Thanks for sharing with us at CD Sunday this week.
Jenny x
CD Sunday DT

Wow Sue this is an amazing and dramatic card, I love the colours, excellent. Thanks for your DT application, good luck and thanks for once again sharing with us at CD Sunday Challenges. Caz