It's been a while since I took a trip along to the Pixies Snippets Playground, but I've been trying to tidy my Craftroom for the last week (I'm getting there), but while clearing a shelf I found this image already coloured and ready to go. So I stopped long enough to get it made up. I can't remember were the stamp is from, as it was stamped as a result of a crafty play with a friend who bought the stamp along with her. But as I said I had coloured it at the time intending to make it into a card. The base card (5x7) was made out of a piece of card in the scrap box, one end was badly damaged so I cut it down to make the base, the silver glitter card was an off cut from a previous project too. Well I'm off to Ikea this afternoon to get some more shelves, hopefully once up I can get my room finished and back to some serious crafting. 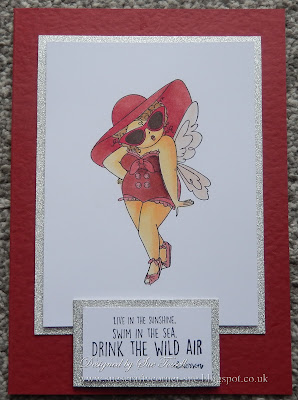 As well as popping along to the playground this week, I'm also going to join in the following challenges.

What a lovely card, love the fabulous sentiment and gorgeous stamp you used.x

This is gorgeous. What a fab fun image. Love your colouring of her. Hope you find what you need at IKEA. Hugs Mrs A.

That image is brilliant and a lucky find during your tidying and the words are great too. Pity the tidiness doesn't last very long, at least not here anyway!!

Such a fun image and card Sue, I have that sentiment as well, many thanks for joining in at Allsorts this week.

Fun card and I love the sentiment

OMGosh, what a fun image, Sue! A brilliant sentiment too. Love this card. xx

A super card Sue, such a gorgeous image and lovely rich colours.
Good luck with tidying your craft room, I nearly gave up the will to live when I did mine recently but it was worth it in the end!
Pauline - Crafting with Cotnob
x

What a lovely project! Thank you so much for entering our challenge at Allsorts this week.

Great card Sue. Of course, using snippets is an added bonus :) and what super colouring as well!

Sorry it's taken me a while to comment - Dudley took a downward turn and has been quite poorly with what our vet says is gastroenteritis. We still feel it was the tick medication that caused it - toxins are a known cause of gastroenteritis. Thankfully he seem to be properly on the mend having had a jab to stop him being sick plus other meds to be taken daiy including anti-biotics and of course all our attention has been focused on him these past few days.